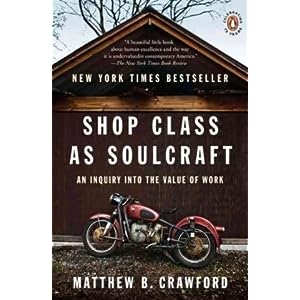 This is a book I happened to pick up off a sale table at a bookstore because it looked interesting (and was buy-one-get-one-50% off). Having become surprisingly domestic (for me, anyway) in the last couple of years, I could buy into the premise of manual labor as an essential part of the human experience, and I wanted to see the author’s take. (I tend to enjoy reading books that develop to a conclusion half-formed ideas I already have–it makes me feel like I’m not crazy, while still requiring me to think.)

As a video-game-nerd-turned-software-developer (and yes, the former led into the latter) my life has been built around electronic abstractions. Yet I’ve come to a point where it usually doesn’t make me feel as capable as putting my hand to an actual physical craft. (Having been programming for over a decade, part of that is that I know it well enough to be hypercritical–but I digress.)

In large part, the book is arguing against the growing “knowledge worker” business culture, in that it (in the author’s view) often thrives on rules versus critical thinking, produces no tangible product, and cultivates no real skill or appreciation for a craft.

Parallel to this, he argues that we’ve become a culture of consumers, quick to dispose, ready to replace rather than repair–a culture based on the abstract rather than the concrete and physical. This changes not just the way we value our resources and possessions (the value of time versus money, if nothing else), but the way we value our own skillsets. Fixing and building just isn’t worth the complexity, time, and frustration anymore–but the author is asking whether there’s not something unquantifiable that we’ve left out of the equation. The author’s argument sometimes feels a bit overstated but in my opinion he’s not too far off the mark.

As a software developer, in fact, I feel like I’m caught between the two extremes. Programming has an element of craftsmanship, and as such it’s not a predictable job that can be governed by strict rules. But it doesn’t quite have a tangible outcome–not in the same sense that, say, woodworking or engine repair does. There is definitely a product being produced, but it is (or at least is perceived as being) infinitely malleable. As such, much of the author’s respect for physical, (semi-)permanent finished products doesn’t really apply–and those properties are central to his point. In some ways, our attitudes towards software can be more in line with the disposable culture that the author rails against. And, to top it all off, software is often surrounded by the culture that the author associates with “knowledge worker” jobs.

This is not to say anything bad about software development, because I enjoy it and couldn’t see myself doing anything else. Rather, I think, it’s a different perspective which can inform my own, and can remove some of the rough edges. It’s an outsider’s perspective–a safeguard against a vacuum chamber. And it’s a reminder not to take things too seriously, because no hobby or craft is an end in itself.

The book’s tone towards the “knowledge worker” culture in business also seems a bit dire, but at the same time I’ve seen the problem when I consider some of the unemployed and underemployed people I know. It seems that, if you don’t pick a specialized field, go for an advanced degree, and network like crazy while you’re in college, you’re left out in the cold. With those options exhausted, there seems to be little demand for specialization and no obvious path to prepare yourself to compete for a job–it’s mostly retail or general office work or what have you. I happen to be (extremely) lucky to have fallen into a career path where there’s a clear, inexpensive path for an amateur to work his way into a professional career. I’m thankful for that, but it’s also very frustrating to know that’s not the norm.

But the book isn’t looking at the macro scale, and as such, isn’t offering a revolutionary solution. I’m not even sure it’s saying that the system is totally and completely broken–only that we have taken a very one-sided mindset. The book is talking on a decidedly personal and philosophical level. Even so, it is not encouraging you to quit your job, mortgage your house, and set up some sort of repair shop.

Overall, it’s definitely a book that falls into the category of “mental exercise”–books I might not actually go back and read or reference, but it challenges the status quo. It makes you question your assumptions and gives you a taste of a different viewpoint, even if you don’t come out seeing eye to eye with the author.